A challenge to spend  time every day creating a piece of Art or design that’s not a greeting card!     October/November 2014

As much as doing this brenworks thing gives me the opportunity to be creative, I often find myself dismissing card designs that require a bit of research and figuring-out ; favouring those I can get stuck into immediately.

And as much as I’ve learned new skills through brenworks, I haven’t played around with them nearly enough. eg. I can screen print, but still have made that Dave Grohl t-shirt from out my brain. My workspace is littered with post-its and scraps and sketches and swatches- all designed to remind me of what to get down to, when I finally get down to it.

BOOM. Gonna do it. Wish me luck.

This is the list of ambitiousness-ness: (order will be changed, most likely)

1. Representation of Cave Art on handmade paper, bigger than a card! For Andy, in a frame.

2. Learn how to use Oil Pastels. Use Oil Pastels
3. Huge Mural!!! In a day! yikes.
4. Dandelion Painting on Photo Paper…hard to explain. . wait and see. . .
5. Make that T-shirt and one for each of the other 3 heads.
6. Develop Cartooning ability.
7. A large Collage of Kilkenny Cathedral, from handmade papers & scraps.
8. Envelope Art. Using the printed insides of business envelope as a drawing/shading material
9. Learn how to create Repeat Patterns. Like for wallpaper, textiles etc. Create some.
10. Cubist-style Piece representing modern instruments such as the electric guitar and the drumkit (rather that the guitar & violin).

I am using the term artist quite loosely- lots of these would be more accurately describe as design or craft but, hey, ‘t’ll be grand! (This may take longer than a month- although I have finished challenge 1 so pics tommorrow, yeahy)

I have done some cave art cards in the past (as you can probably see in the gallery!) and I really liked them because, for once, I wasn’t struggling with the bumpy texture of the paper- It was helping with the rock-effect!

I had two ideas for the bigger piece- 1. A detailed drawing of one animal- partly using cave-art techniques and partly going for a more life-like 3D representation or, – 2. A collection of scenes from different cave works from different countries. I opted for the second one. I collected images from the internet and came up with an initial sketch. 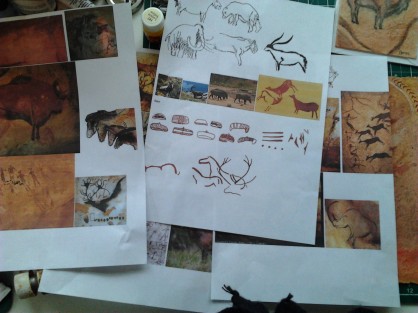 I decided to split it into 3 “bands” of images; initially intending for each band to represent a type of stone and therefore a geographical area, but I didn’t really stick to this idea!

People were not represented often in cave art, but I included versions of the two most striking human images I found. I wanted it to have a sense of movement and landscape- almost like a map.

Some things never change- 40.000 years later I am still using charcoal & paints containing ochre pigments! (I’m not 40,000 years old– you know what I mean). One of the things that I find fascinating about cave art is how similar the images and subject matter are from completely different parts of the world. 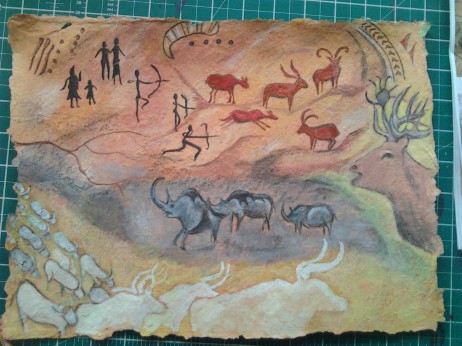 If I were doing it again, I would have left out the Stag, I find it makes the whole thing a bit disjointed. It gave me stress head! I think next time I will get rid of the thing that gives me stress head; that can be the thing I learn from this challenge! 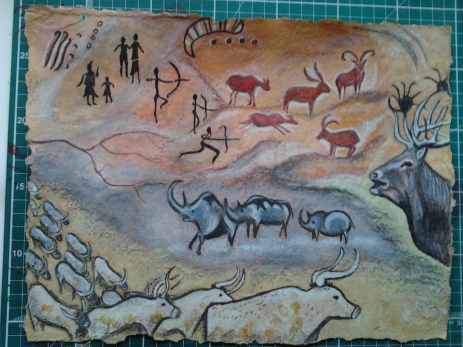 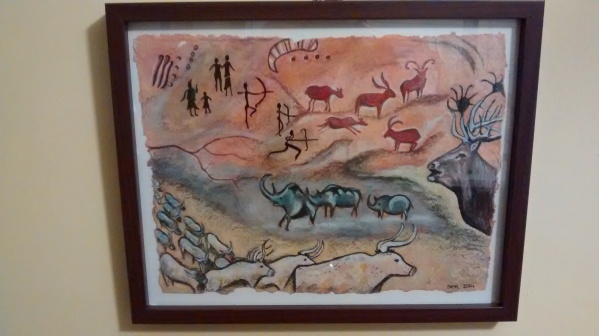 Ultimately, I am happy as a bison in shite near Santander, Spain!